We begin our route by getting our Articket stamped at the Fundació Joan Miró, housed in an exceptional building by architect Josep Lluís Sert. Here we find the most complete public collection of Joan Miró work. This unique space was conceived by the artist himself with the aim of making art accessible to everyone, and is the best place for a full itinerary through all phases of the artist’s artistic and personal path.

Do not forget to spend time in the Pati Nord courtyard, from where you can enjoy a spectacular view of Barcelona. If you want to grab a snack while here, the foundation restaurant is in the building itself, and is one of the few places to eat in the area. 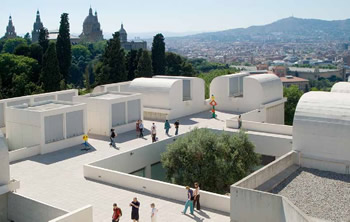 How to get there?
2. Sculpture Garden

Walking in the open air while looking at works of contemporary art sounds rather appealing. The Sculpture Garden found beside the Fundació Joan Miró was design for precisely that. In 1990, the Foundation selected several artists and commissioned them to create eight of the ten sculptures currently found in the space. Take your time and enjoy what you see in this outdoor setting, with works by artists such as Tom Carr, Perejaume and Enric Pladevall. 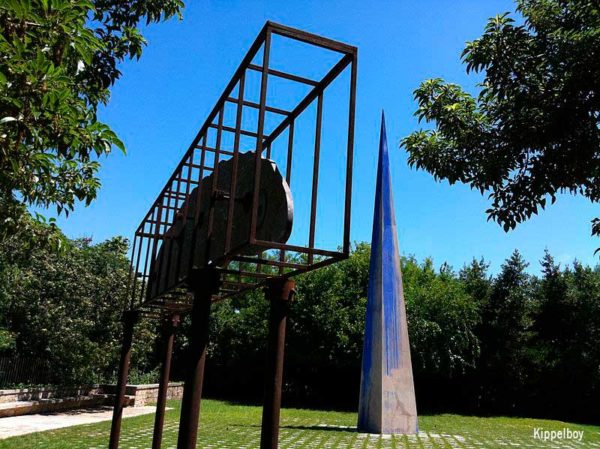 How to get there?
3. Teatre Grec

While you might imagine for a few seconds that you have been transported to Ancient Greece, you are still in Barcelona, and this is an architectural project from the 20th century. In 1929, as part of the Barcelona International Exposition, Montjuïc Park was radically transformed to become a leisure zone for city residents. It was at that time when the Greek-style theatre known as the Teatre Grec was built on the site of a former quarry.

In the summer the site comes alive and becomes the focal point of the famous Festival Grec, a performing arts event held since 1976 that fills the city with art and culture in the month of July. If you are in Barcelona during the summer months, we recommend that you take in some of the events programmed.

Montjuïc has traditionally been a leisure and relaxation zone for the people of Barcelona, who went up the mountain to enjoy the landscape and different sites with a special character, like this one. If you move closer to the Font del Gat, or Cat Fountain, you will see how the spout resembles a cat’s face. The reason for the name is that much clearer now. A very popular traditional song tells the tale of an amorous affair between a young lady and soldier which took place, precisely, at the Font del Gat. The song is so well known that the fountain has become an emblematic spot in the city and an icon of Catalan culture. Consult the words of the song here. Or better yet, just ask any Catalan to sing it for you, they will know it for sure!

How to get there?
5. Palauet Albéniz

Make a short stop here to get a look from the outside at the gardens and building of the Palauet Albéniz. The structure was built for the International Exposition of 1929, specifically as a residence for the Spanish royal family. Since the 1930s, however, it has been known as the Palauet Albéniz, in honour of the Catalan composer Isaac Albéniz. The building has been used for various purposes over the years, and is currently the official residence of the Head of State when visiting the city. Montjuïc is even the residence of the country’s highest-ranking dignitaries.

How to get there?
6. Shrine of Santa Madrona

Starting in the Middle Ages, Montjuïc would be dotted with small churches like this one, where people would go on certain festival days. The Shrine of Santa Madrona, originally from the 15th century, is the only structure that has survived down to our day. It is a chapel that is well-loved by Barcelonans, as for a long time it housed the reliquaries of Saint Madrona, one of the most popular venerated saints over the course of the city’s history.

The Museu d’Art Nacional de Catalunya has many of the finest pieces of religious art in Barcelona and Catalonia. Visit it and you will understand the importance of religious life in the city over so many centuries of its history. 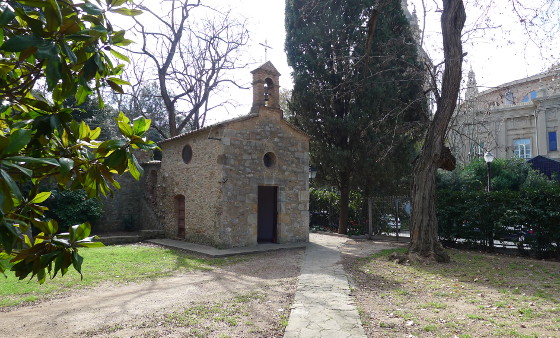 How to get there?
7. Historical Botanical Garden

The Historical Botanical Garden is a small treasure of Barcelona gardening that was created in 1930 in former quarries, near the reproduction of an old stone farmhouse built on the occasion of the International Exposition of 1929. In a short period of time a fine collection of autochthonous and non-local plants was collected around it, with some of the tallest trees in all of Barcelona also found here.

Enter this enchanting space and discover landscapes that have inspired the kind of art you can also see in museums like the Museu Nacional d’Art de Catalunya, our next step along the way.

How to get there?
8. Museu Nacional d’Art de Catalunya

Go up to the terrace at the Museu Nacional d’Art de Catalunya and relax a while before starting the outstanding visit to the museum collection with your Articket. It is your chance to have a drink and a snack in the cafeteria while gazing out at the city skyline. Surprised? This is probably the best view of the city anywhere. Do not forget to look at the building housing the museum, with its classical references, built in 1929 as the main centre for the International Exposition. In the spectacular Sala Oval, the Exposition’s opening ceremony was held (along with other events), presided by Spanish king Alfonso XIII. 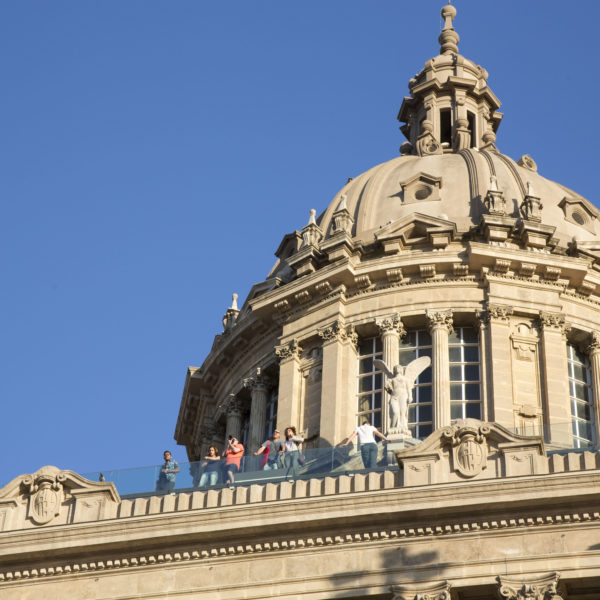 How to get there?
9. Mies Van der Rohe Pavilion

The city is famous for its medieval and art nouveau buildings. If you visit Montjuïc, however, you will also discover how Barcelona has one of the most famous buildings in the history of modern architecture. We are speaking of the German Pavilion, designed by Ludwig Mies Van der Rohe and Lilly Reich to represent Weimar Germany at the International Exposition of 1929. Although it was dismantled after the event, the building was deemed to be so important that in the 1980s the Barcelona City Council decided to rebuild it on its original site, a decision that was altogether justified.

How to get there?
10. Magic Fountain of Montjuïc

The Font Màgica, or Magic Fountain, is a concentration of waterfalls and artificial ponds connecting the Palau Nacional above with Plaça Espanya below. It is one of the city’s most iconic sites. Built for the 1929 International Exposition, it is especially beautiful at night, when the fountain’s well-known musical choreographies are presented, combining music, water and coloured lighting. Not to be missed!

Click here to consult the schedule for the water and light shows. 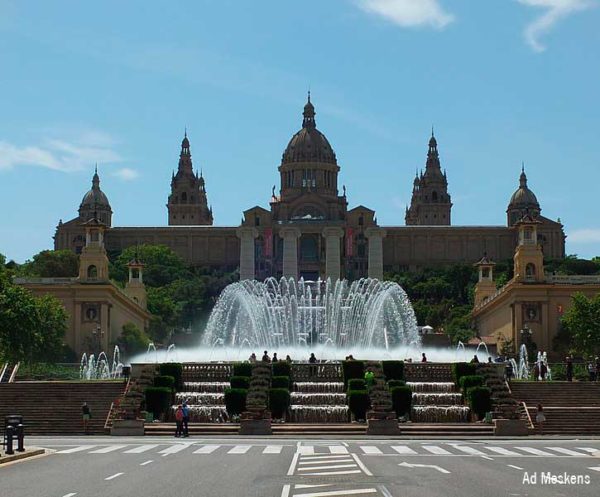 How to get there?
11. Casaramona Factory

This unusual industrial complex excels for its architecture, suggestive of a castle, with its façade merlons as if on a crenelated parapet, and the two water towers standing out above the whole like commemorative monuments. Despite being an industrial building, Josep Puig i Cadafalch, who was one of the greatest architects of the Catalan art nouveau, worked on the building’s decorative features with great care. It is currently the site of the exhibition spaces of the Obra Social ”la Caixa”, the foundation of the ”la Caixa” bank.