This large black aluminium wave, work of the Basque sculptor Jorge Oteiza (1908–2003), is one of the most iconic pieces in the MACBA Collection. The piece is fully integrated into the alternative ambience that typifies the Plaça dels Àngels square in front of the museum, as it reflects on the power of light and shadow and its own relationship with the space it occupies.

Observe how the dark tone of the wave and intense white of the museum enhance the piece’s sinuous shape. If you like what you see, do not miss the chance to use your Articket to visit the MACBA, where you will find other Oteiza sculptures amongst interesting works of contemporary art. 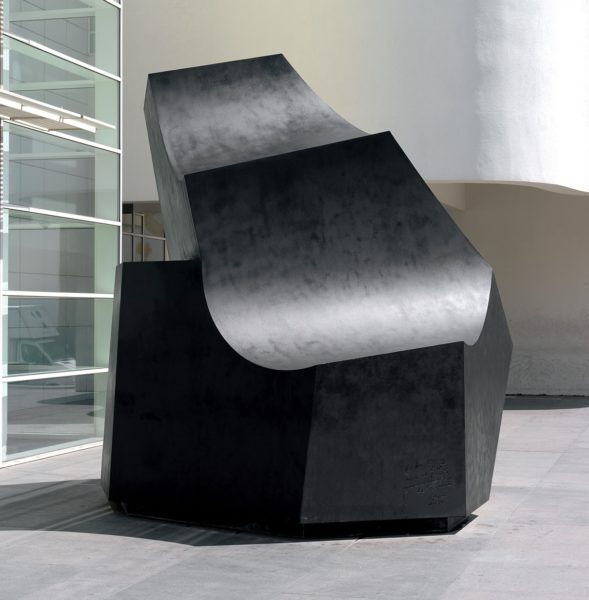 How to get there?
2. Barcelona, Mural G-333
Eduardo Chillida

That same year as the Oteiza piece, the museum requested another Basque sculptor, Eduardo Chillida (1924–2002), to create this massive ceramic mural. Placed on the dividing wall at the end of the square, it fits the museum into the surroundings of the Raval neighbourhood. It should be kept in mind that public space is highly relevant for the work of Chillida, who considered it was the only setting that ensured that everyone had access to art.

The mural, whose texture sets it somewhere between sculpture and engraving, is characteristic of the later work of Chillida, focused as it was on researching space and volume. 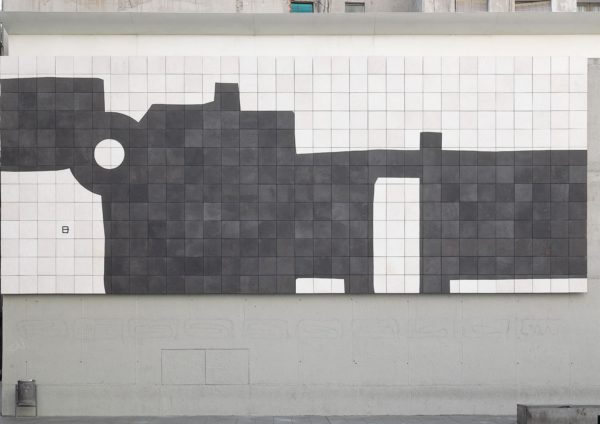 How to get there?
3. Together We Can Stop Aids
Keith Haring

A couple forming a pair of scissors tries to cut the head off a serpent with a needle in its tail, which in turn is chasing after various figures. The text says it clearly: it is AIDS, the syndrome that would end the life of the mural’s creator, the renowned American artist and activist Keith Haring (1958–1990), who died just a year after painting the work. The red tone denotes blood; the characters, the contraceptives applied to the beast and the text in Spanish, “Todos juntos podemos parar el sida” [Together We Can Stop Aids], constitute the hope and strength of the struggle against the disease.

Haring painted the graffiti in the middle of the Raval. To save it from disappearing, the Barcelona City Council, the MACBA and the patrons of the artist’s legacy agreed on this exact copy of the mural, which was remade several times before coming to its current placement. 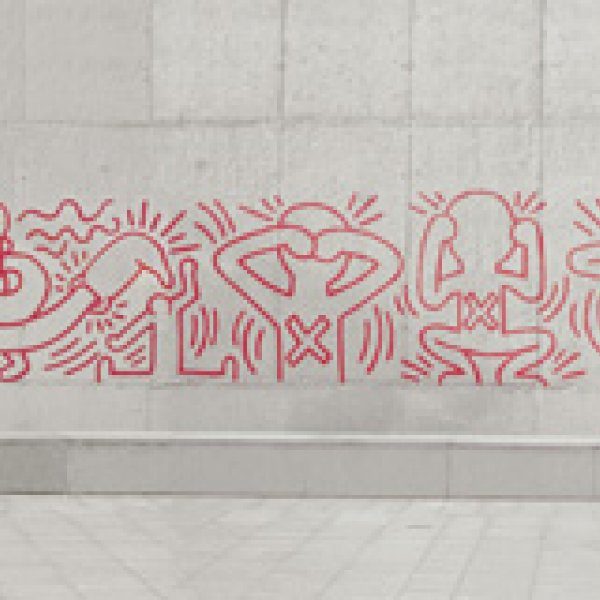 How to get there?
4. Pati de les Dones
CCCB

The courtyard of the CCCB (also called Pati de de les Dones or Women’s Courtyard), which until the 19th century had been part of the historical alms house, currently hosts a variety of cultural events. It is often a space for neighbourhood encounters, especially for younger generations. When you walk through the courtyard you might want to participate in whatever is going on, then use your Articket to visit the cultural centre, where you will find interesting exhibitions on various facets of contemporary culture.

Observe how the space combines history with cutting edge modernity. Lift your gaze to the upper part of the façade and see how Barcelona and even the sea are reflected in the glass, with its mirror effect. Art on the street can also take the form of architecture.

Consult visiting hours here for the CCCB Mirador, the lookout. 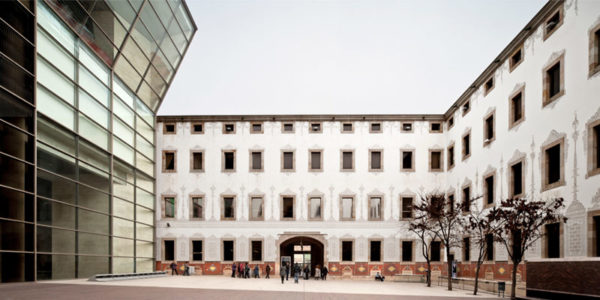 How to get there?
5. Mosaic at the Pla de l’Os
Joan Miró

You are standing on a work of art that Joan Miró (1893–1983) designed in 1976 to welcome everyone arriving to Barcelona from the sea. It is also true that the piece denotes the centre of the old city; in the past many travellers docked in the port and walked up the Rambla until entering into the ancient part of the city through the gates in the wall, found just here. The piece also evokes the relationship between the artist and the surroundings, given that Joan Miró was born on the Passatge del Crèdit, which is very near where we are.

The mosaic is set into the ground so that everyone crossing the point might step on it, effectively experiencing it first-hand. The circular shapes and primary colours (blue, yellow and red) pick up on the artist’s habitual language. Do not forget to visit the Fundació Joan Miró with your Articket, where you will discover the creative universe of one of the world’s most relevant modern artists. 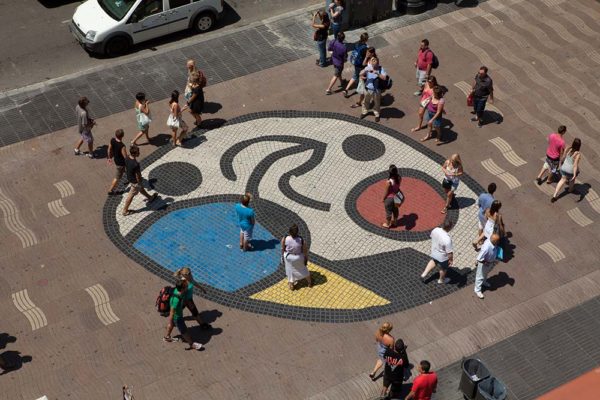 How to get there?
6. Friezes at the headquarters of the College of Architects
Pablo Picasso

Do you see these friezes on the building? They are the work of Pablo Picasso (1881–1973), who created them for the headquarters of the College of Architects of Catalonia (COAC) in 1962. The most emblematic mural, which is also the most visible, is known as the Frieze of the Giants, as it represents aspects of popular traditions and festivals. Do you recognize the giant figures, dances and palm branches associated with Palm Sunday? Get a closer look at the adjoining façades on Capellans and Arcs streets, or enter into the Sala Picasso of the COAC, where you will see another four frieze murals.

If seeing a work of art by Picasso in public space is a treat for you, prepare yourself for a visit to the Museu Picasso at Montcada 15–23, just a few minutes’ walk away. Not to be missed! 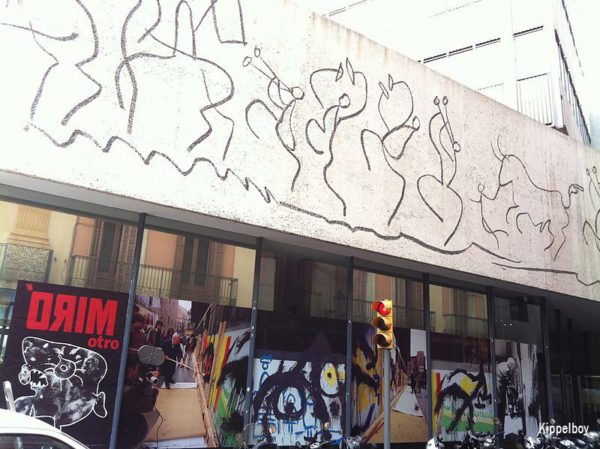 How to get there?
7. The World Begins with Every Kiss
Joan Fontcuberta and Toni Cumella

This piece is comprised of some 400 photographs reproduced on small ceramic tiles, which when seen together make up the now-iconic image of kissing lips. In 2014 the city commemorated the 300th anniversary of the defeat of the Catalans in the War of the Spanish Succession, which lead to the loss of rights and liberties for Catalonia. Inspired by the slogan “Live Free”, the readers of a local newspaper sent in thousands of photographs, which the photographer Joan Fontcuberta and the ceramicist Toni Cumella converted into this photocomposition. Draw nearer and take a closer look at the images. What does the idea of live free mean to you?

How to get there?
8. Born
Jaume Plensa

Look for a trunk made of iron placed on a bench. After that, take a look at the rest of the benches along the Passeig del Born walking avenue, where you will find other iron sculptures shaped like cannonballs. The pieces make up the piece entitled Born, a work by the celebrated contemporary Barcelona sculptor Jaume Plensa (1955) that was done in 1992 for the Olympic Games. While the trunk symbolises the history of guilds and commerce in the Born neighbourhood, the cannonballs refer to the destruction of the area by the Bourbon troops over the course of the siege of the city in 1713–1714, during the War of the Spanish Succession.

How to get there?
9. Ants
Joan Salvat-Papasseit

Look at the building to your left. Decorating dividing walls in the city is a habitual practice in Barcelona, so that the murals by Chillida and Keith Haring were by no means the only examples.

This calligram, which traces out the path of ants, is by the Catalan avant-garde poet Joan Salvat-Papasseit. It was published in 1921 in the book L’irradiador del port i les gavines [The Irradiator of the Port and the Seagulls]. In 2004 the work was recreated on this dividing wall as part of the project Mapapoètic, and from that moment on has become a symbolic piece along the Passeig del Born.

How to get there?
10. Homage to Picasso
Antoni Tàpies

The assemblage of art nouveau furniture found inside the large cube represents the well-off Barcelonans of the time when Picasso lived in the city. The iron beams cutting through it are in turn symbolic of the industrial city, working class and rebellious. In the lower part of the sculpture we can clearly read the phrase “Un quadre no serveix per a decorar un saló, sinó que és una arma d’atac i de defensa contra l’enemic” [A painting is not meant to decorate a room, but rather is a weapon of attack and defence against the enemy]. With this piece, Antoni Tàpies renders homage to the painter from Málaga and his conception of art as a something with a social function. Visit the Fundació Antoni Tàpies with your Articket and discover the work of the artist, which will no doubt surprise you.

How to get there?
11. Grief
Josep Llimona

Take a close look at the sculpture in the middle of the pond. It is one of the better-known pieces by Josep Llimona, considered the leading sculptor of the Catalan art nouveau movement known as Modernisme. In 1907 Llimona sculpted the figure of a nude woman rising out of a marble block, as was done in Renaissance sculpture, with her face covered by a long mane of hair. The piece is delicate and suggests melancholy, solitude and—as the name itself suggests—grief (desconsol in Catalan). The piece itself is a copy. To see the original, get your Articket stamped at the Museu d’Art Nacional de Catalunya, where you can take in the original. 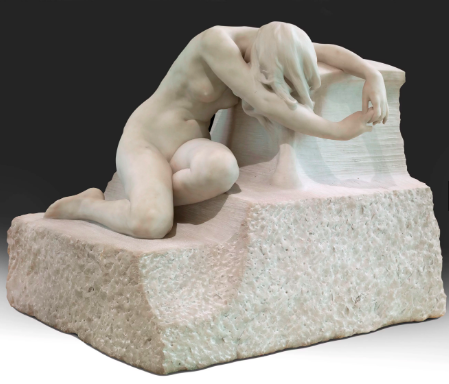