Did you know that the Museu Picasso is found in a series of buildings with over 800 years of history? The works of the Málaga-born artist can be seen by walking through these five large palaces on Montcada Street, the residences of the wealthiest merchants of medieval Barcelona.

While these palaces have been altered over time, we can still see their original structures. Stand in one of the many courtyards and look at the building surrounding it. On the ground floor there were once the kitchens, the stables and the rooms of those in service. You will see that the courtyard has a monumental staircase going up from it to the next floor, where we will find sumptuous halls where the palace owners lived. You are invited to enter the museum with your Articket: Picasso’s work is waiting for you within these medieval palace walls. 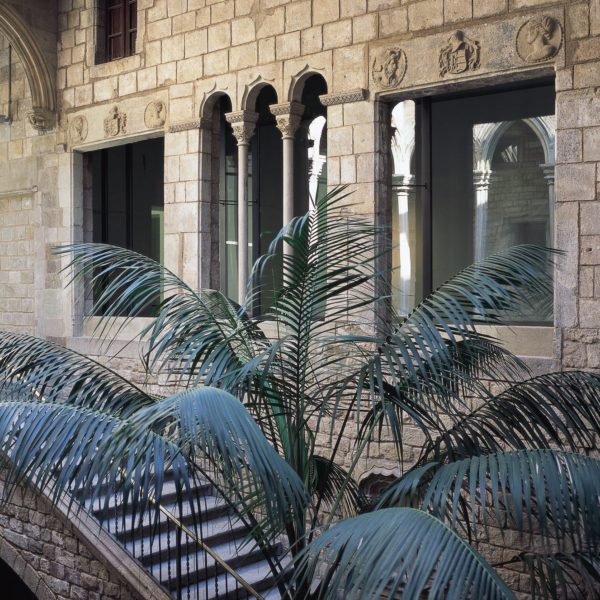 How to get there?
2. Santa Maria del Mar

Santa Maria del Mar is the most famous gothic church in Barcelona. The outside is sober and austere. Then enter through the main door of the basilica, found on Plaça Santa Maria. The sensation of vastness inside the church, with its three naves held up by only eight columns, contrasts sharply with the exterior image.

This church was built over a period of 54 years in the 14th century, a record construction time that can only be explained by the economic dynamism of the period as it affected the Ribera neighbourhood where it is found. Wander through this temple without rushing, and let yourself be taken in by one of the icons of medieval Barcelona. 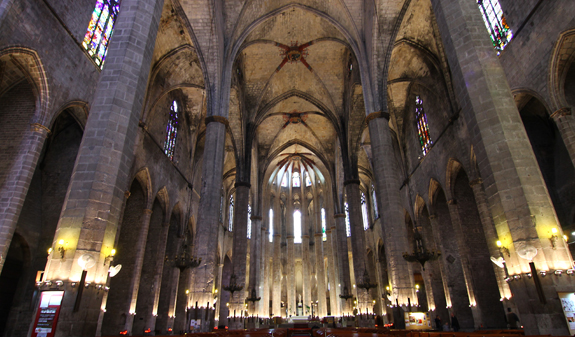 How to get there?
3. Plaça de Sant Just

Located in the centre of the Gothic Quarter, one of the most visited parts of the city, the Plaça de Sant Just is an oasis of tranquillity amidst the bustling historical centre. The church of Sants Just i Pastor, a large Gothic structure from the 14th century that presides over the square, gives its name to the site and to the charismatic surrounding neighbourhood.

Look at how the three faces on the Gothic fountain look back at us: they seem to be crying out for you to drink from their spouts. We recommend that you take a few minutes to sit on the church steps, resting a bit while contemplating the square and its surrounding buildings. Is there anything quite like this moment?

How to get there?
4. Plaça del Rei

The Plaça del Rei was the political epicentre of the city in times of the Kingdom of Aragon, one of the great Mediterranean empires in the Middles Ages. View the façade of the Palau Reial Major (or Grand Royal Palace), the imposing Tower of King Martí and the Santa Àgata chapel, built on top of the ancient Roman walls of the city.

In the centre of the square we find the sculpture Topos V, a cast iron piece by the Basque sculptor Eduardo Chillida that bridges the distance between the Middle Ages and the contemporary world. If you like this piece we recommend that you visit the MACBA with your Articket: you will find work from this same artist there. 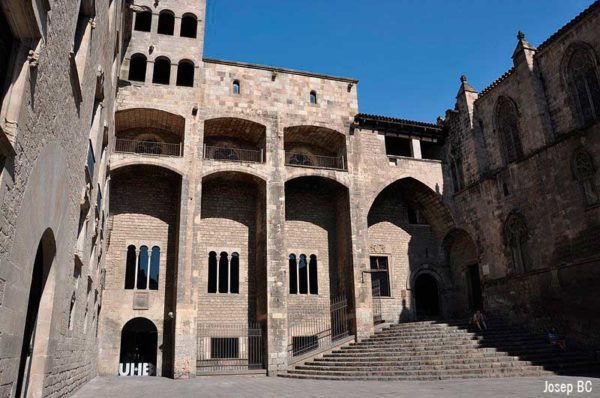 How to get there?
5. The Cathedral Apse

Now you are in front of the oldest part of Barcelona Cathedral. At the end of the 13th century the expansion of the former Romanesque cathedral was begun, which would lead to its conversion into a large Gothic basilica. If you look up you will see gargoyles in the shape of exotic and fantasy animals, such as an elephant, a lion and a unicorn. You will surely find this spot one of the most enchanting in the entire Gothic Quarter.

We recommend you visit the Cathedral, with its many artistic treasures. It is the ideal way to complement your Articket passport to the Gothic and Renaissance collections of the Museu Nacional d’Art de Catalunya.

How to get there?
6. Jewish Quarter

Call is a word used in Catalan to refer to a medieval Jewish quarter. It is argued that most probably the word comes from the Latin term callum, which means “narrow street”. Explore the narrow lanes of the Barcelona Call and you will understand the reasoning behind this theory.

Keep in mind that the Jewish community of Barcelona, which was a main factor in the development of a leading city in Mediterranean commerce, apart from being the seat of the monarchy, was one of the most prolific on the Iberian Peninsula. However, the community’s history was cut short dramatically in 1391 with a Christian assault on the quarter, with many residents assassinated and many survivors choosing to flee the city.

How to get there?
7. Basílica of Santa Maria del Pi

Found between the Call and the Rambla, the Pi basilica is one of the most popular Gothic churches in Barcelona. The pine trees found in this area in the Roman period and late antiquity gave its name to the church and the surroundings, the Pi (pine tree) neighbourhood. Get a good look at the façade with its massive rose window, one of the largest on the Iberian Peninsula.

You can now walk around the church to the area behind the apse. You are now at the foot of the Pi bell tower, the highest medieval tower in the entire city. From the top, some 54 metres high, you have an almost vertiginous view over the site of Barcelona.

How to get there?
8. Àngels Chapel

There is no question that the MACBA building is one of the most attractive in the Raval neighbourhood, but it is not the only one worth paying attention to. On the other side of the bustling Àngels square you will find the MACBA chapel, an old convent building now reconverted into a space for various MACBA events and cultural activities. The original church was built in the 14th century by the community of Domincan monks, back when the Raval itself was mostly still an area for farming.

Visiting the MACBA you will have access to this space, a combination of modernity and the past, as it fits modern, cutting-edge cultural activities into a history-charged architectural setting. Take advantage of your visit to the museum with Articket and discover enthralling works of contemporary art. 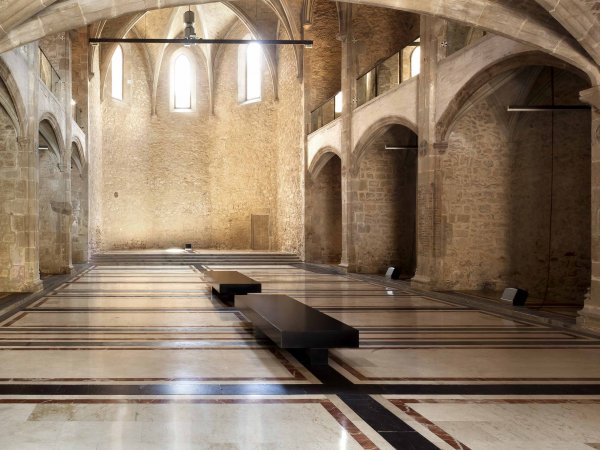 How to get there?
9. Hospital of the Santa Creu

Stop for a rest beneath the orange trees in the courtyard of the Hospital of the Santa Creu. The gothic naves surrounding you bear witness to the fascinating history of the first public hospital in Europe, founded in 1401 for the city’s poor, orphans and the unhealthy.

At the beginning of the 20th century the hospital was moved to the new complex, then outside the city, designed by the art nouveau architect Lluís Domènech i Montaner. The space you are in now was then converted into the site for various leading cultural institutions, such as the National Library of Catalonia. Nowadays many Barcelonans study in the halls of the former medieval hospital.

How to get there?
10. Historical Monastery at Sant Pau del Camp

Picasso would often go to Sant Pau, drawn by the unusual shapes in the cloister and the beauty of the sculptures on the capitals. In fact, one of his earliest known works is precisely an oil painting on board where he depicts the cloister.

Click here to see the piece and remember that you should not miss the chance to visit the Museu Picasso, where you will discover the artist’s work and his close relationship to Barcelona. 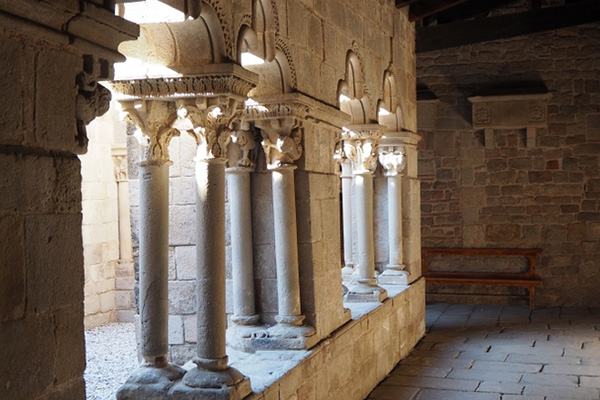