The hotel is found at the upper part of the Jardinets de Gràcia, the boulevard that connects the Gràcia neighbourhood with the most luxurious street in the city, the famous Passeig de Gràcia. Looking up, the building on the right is the former Fuster residence, now converted into one of the most distinguished hotels in the city.

In 1908 an important industrialist in his time, Marià Fuster, commissioned the building meant to be his residence to the renowned art nouveau architect Lluís Domènech i Montaner. Notice the white marble facades, with columns in pink stone and the building’s roof, which refers to the Parisian architecture that was fashionable in Barcelona at the start of the century. You will surely agree that the building has everything to be considered the finest on the Jardinets de Gràcia.

How to get there?
2. La Pedrera

The Casa Milà, better known as La Pedrera, was designed by Antoni Gaudí in 1905. The façade is inspired by the idea of a mountain eroded by wind and water, and was revolutionary for its time, giving rise to admirers and detractors alike.

It is said that there were even a few neighbours and other housing developers who refused to speak to the Milà family after it was built. They were convinced that because of this bizarre structure the value of land would drop in the area, at a time when there was a lot of new construction. If you had been a Barcelonan in the early 20th century, would you have been able to appreciate the innovative character of La Pedrera? Or do you think that you too would have spoken disparagingly of what would become one of the great examples of world architecture? 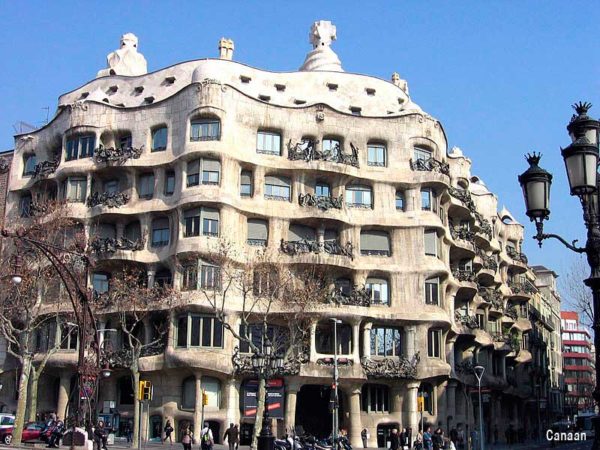 How to get there?
3. Montaner i Simón Publishing House (Fundació Antoni Tàpies)

The Fundació Antoni Tàpies is located in a building typical of the industrial art nouveau, designed by Domènech i Montaner in 1879 to be converted into the new headquarters of the Montaner i Simón publishing house.

The sculpture Núvol i cadira [Cloud and Chair], found on the roof terrace yet visible from the street, greets visitors to the foundation. Enter and discover the work of Tàpies while also taking in the interior of the former publisher. You cannot miss the library, one of the most emblematic spaces in the building. 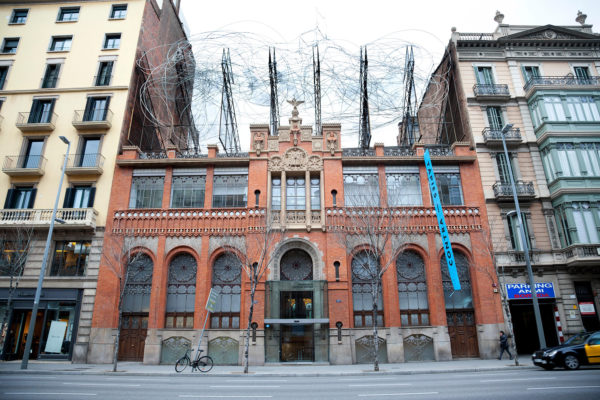 How to get there?
4. The Block of Discord

Five premium quality buildings in a row on the same city block. Three of them were built by leading architects of the Catalan art nouveau: near the corner with Aragó Street, the Casa Battlló by Antoni Gaudí; beside it, the Casa Amatller, by Puig i Cadafalch; and on the other end, right at Consell de Cent Street, the Casa Lleó Morera, designed by Domènech i Montaner.

There is a story from Greek mythology where the gods must choose who is most beautiful from amongst Hera, Athena and Aphrodite. The winner will receive a golden apple, known as the Apple of Discord; this is where the name of this block comes from. Rivers of ink have flowed in arguments over which building is more attractive. If it were up to us, we would give the apple to the municipality of Barcelona, since it is the city itself that really benefits from so much talent in such a tight area.

How to get there?
5. The Lamppost-Benches on Passeig de Gràcia

Look at the lamppost-benches on either side of the street with their trencadís broken tile technique, which was so fashionable during the period of Catalan Modernisme. While many observers attribute them to Antoni Gaudí, they were actually designed by the architect Pere Falqués in 1906, in what is an unusual combination of creativity and functionality. 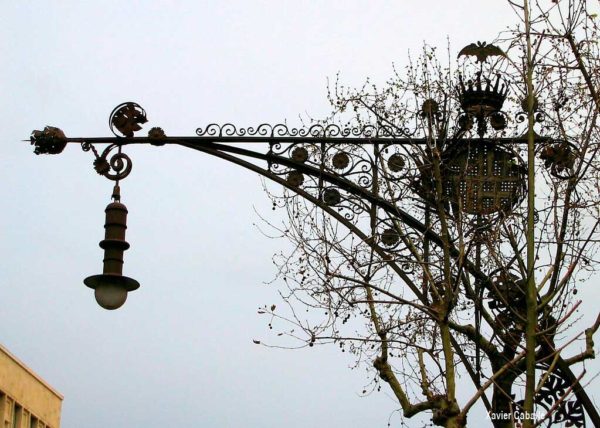 How to get there?
6. Casa Elizalde

You are now in front of one of the last family residential palaces remaining in the Eixample. In 1888, the architect Emili Sala i Cortés designed this building in an eclectic style that would become the residence of the Elizalde family, who converted it into the headquarters of the family business, dedicated to the manufacture of luxury automobiles and aviation engines.

At the end of the 1970s there was a plan to demolish it to build another block of flats. Yet due to the pressure of neighbouring residents, the Barcelona City Council purchased the building to restore it for use as a dynamic city cultural centre. Thanks to this legacy, all Barcelonans can enjoy the beautiful building and its interior courtyard.

How to get there?
7. Gardens of the Torre de les Aigües (Roger de Llúria, 56)

Enter into the most charming gardens of the Eixample through this narrow passage. There you will see the circular tower made of brick, which stands out for its enigmatic quality. The structure was a key feature of the new neighbourhood of the Eixample when it was being built, a paradigm of how a modern community required a proper supply of potable water for every new flat being built.

The architect Josep Oriol Mestres, who also designed the new façade of the Barcelona Cathedral, created this enormous upraised cistern to store water and then distribute it throughout the Eixample. It became known as the Torre de les Aigües, or Water Tower. Enjoy the calm ambience of the space as you take a break. You should not miss this little, history-charged corner of the city.

How to get there?
8. Passatge Permanyer

Amidst the hectic life of the Eixample you will find this small private lane, one of the oldest and best preserved in the neighbourhood. It evokes the leisurely life of the early bourgeoisie that lived here. You will observe how all the original lampposts are intact, as well as the gates of the homes and the early stonework.

You will perhaps be surprised to find out that the Eixample, which is so dense in the present, was originally conceived as a garden city. The idea was to combine large buildings and avenues like Passeig de Gràcia with areas with more green space and smaller, single-family residences with a garden in front, as can be seen here. It would be quite a luxurious lifestyle—perhaps you will agree. 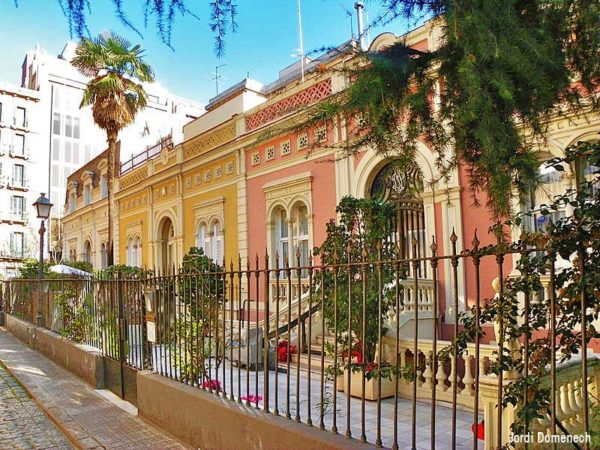 How to get there?
9. Palau de la Música Catalana

If you have heard people say that Modernisme, the Catalan art nouveau, is the artistic style of the Eixample, perhaps they have never taken a proper look at Ciutat Vella, the old city. The Palau de la Música is one of the most astonishing buildings by Lluís Domènech i Montaner. Perhaps you have noticed it is the fourth building by the same architect on this same route?

Built from 1905 to 1909, the Palau is without a doubt one of the most jovial and relaxed buildings of the Barcelona art nouveau. In every nook and cranny you will find references to the history of Catalan and European music, along with persistent bows to nature, with multiple floral motifs. We suggest you get a chance to visit the building inside, it will leave you stunned.

How to get there?
10. Els Quatre Gats

Amidst the bustle of the main shopping streets in the old quarter, this unusual building by Puig i Cadafalch could easily be missed. It was designed in 1896 as a magnificent homage to traditional Catalan architecture. On the lower floor a beer hall-cabaret was soon installed, which while only being open for six years ended up being one of the intellectual focal points of the Catalan art nouveau. The club was run by a former waiter of Le Chat Noir in Paris, and came to be the home for Bohemian and avant-garde circles in Barcelona of the time.

Its famous literary debates featured the participation of artists such as Santiago Rusiñol, Ramon Casas and Pablo Picasso, and this latter had his first solo exhibition in the space. Remember to visit the Museu Picasso with your Articket, and enjoy some of the earliest work chosen to be exhibited. You can also visit the Museu Nacional d’Art de Catalunya, where you will find the work of many of the artists who experienced first-hand the ambience of Els Quatre Gats. One hundred percent Catalan Modernisme! 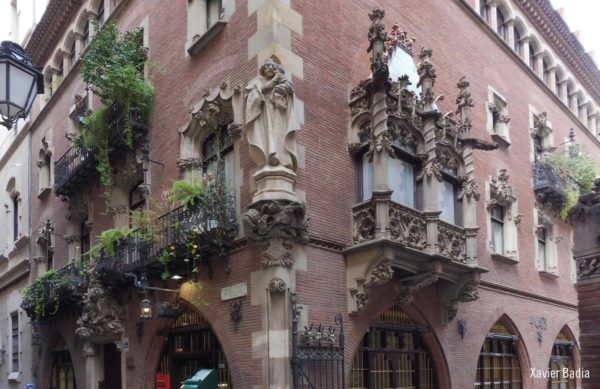